Top Gun is another classic movie slot from Playtech portfolio. Get ready to be lifted up into the sky and into glory with Playtech’s Top Gun slot machine. It is based on the 1986 classic action flick Top Gun that had and still has a lot of memorable moments, scenes and quotes despite being a bit cheesy is some parts.

Released in November 2015, Top Gun is an officially licensed slot game that features characters form the movie, imagery and soundtrack. You will feel the adrenaline pumping as soon as you hear the beats of ‘Danger Zone’ and feel the nostalgia when Berlin ‘takes your breath away’.

The game offers an exciting open air action adventure across 5 reels and 3 rows. It features the All Ways technology meaning you won’t be up against traditional pay line structure but a 243 ways to win system. There is an exciting Turbo Mode feature that enables really fast spinning of the reels and the betting starts from $0.25. You can stake up to $250 per spin if you like to set up a good base for rewarding return payouts. 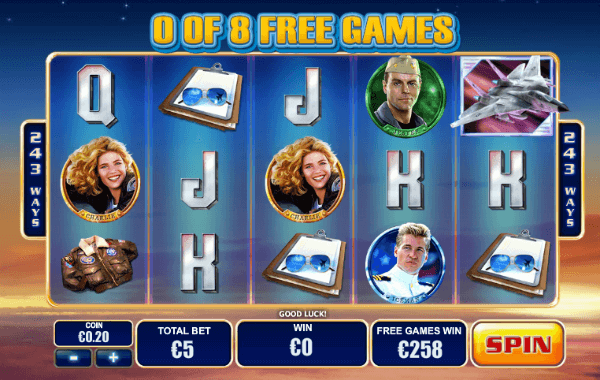 The reels are decorated with symbols depicting popular movie characters such as Iceman, Charlie, Jester, Goose and Stinger. Unfortunately, Tom Cruise’s character Maverick didn’t revive his celebrated role, but the slot’s atmosphere doesn’t suffer for it. A Top Gun logo is the game’s Wild and it brings the highest payout of 1500 coins for five of a kind. A Fighter Jet represents the Scatter symbol, so stay tuned for the special features overview.

Playtech made sure Top Gun benefits from two special features, one being the Dogfight Wilds Feature and the other being the Danger Zone Free Games. Dogfight Wilds are activated in a random fashion during regular gameplay. When the fighter jet appears it will shoot arbitrary Wild symbols onto the reels. The maximum number of awarded Wilds in this feature reaches 15.

Scatter Fighter Jets trigger Danger Zone Free Games, landing three of them is enough but it has to be on the first, third and fifth reel. The reward is 8 free spins with an addition of Dogfight Wilds, so expect both enhanced Wilds and enhanced winnings!

Top Gun is one slick slot machine. The movie elements were transferred nicely onto the reels, with the only exception of the star, Maverick, being absent. Die-hard fans may be disappointed, but hopefully average to high variance will compensate for the defect.

Top Gun has a theoretical RTP of 95.02% which isn’t as high as some Playtech video slots have to offer, but it is worth spinning the reels a few times at least. Relying on the movie’s popularity, Playtech obviously targeted the wide-spread community of fans, but there are interesting features that can attract younger players as well, those that haven’t had the chance to see the film but simply like aviation-themed slots.