There are lots of different ways to spend your summer time holiday. For most people, it’s a little more than a dip in the sea, lounging on the beach, soaking up the sun rays and enjoying yourself oh so thoroughly. Some may be seeking something more extreme, others something more relaxing. We’ll admit, scuba diving never appealed to us, but there’s just something about this new RTG slot that reeled us in.

We’re not big fans of Scuba Fishing slot visuals, which feel a bit outdated given RTG’s competition. The title is played on a simple 3×3 playing field with 27 ways to win. The title has only a single special feature, and that is a full reel Wild that appears across the middle reel.

We know Scuba Fishing is a medium variance title, more suitable for casual players who want to see smaller, but more frequent pays. RTG have not given us the official RTP.

Why to play Scuba Fishing 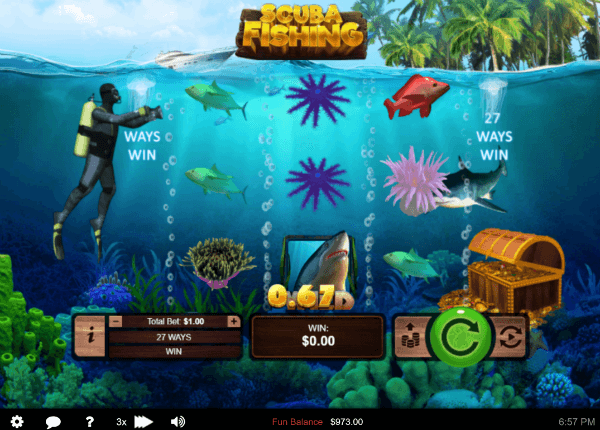 There is only one special feature in Scuba Fishing.

When three Wilds cover the middle reel, it remains expanded while the first and third reel re-spin. That’s about it, honestly.

When it’s all said and done, Scuba Fishing seems like a decent game at heart. But it’s marred with a lack of visible RTP, graphics that are very clearly outdated compared to its competition, and quite frankly, lackluster special features. You can still get some awesome pays out of it, but we think the flaws outnumber the positives.