The gaming software design has come a long way since the first electronic descendants of the 19th century’s Liberty Bell were lined up in the casino halls, featuring the PG-13 imagery and naïve aesthetics. As the market evolved, slot machines developed into more complex platforms, but the true revolution was sparked with the arrival of online casinos and the expansion of internet gambling.

The simple 3-reel machines were pushed aside to make room for visually supreme releases with more sophisticated structure and features, going as far as to adapt the slots to Virtual Reality technology.

The new age also created the need to provide the players with more engaging content, and the usage of the popular sex in advertising method did not bypass the gambling industry. To maintain the competitive edge, the software developers started looking for new ways to appeal to their target audience, launching slots of a more provocative nature (for both land-based and online gambling markets).

So, if you ever find yourself feeling particularly naughty, the adult slots listed below might warm up a lonely night and provide a few hours of uncensored fun.

Compared to some releases from this list, Scandinavian Babes slot is quite toned-down, leaning more towards moderate erotica. Played on 5×3 reel grid across 15 adjustable lines, this Play’n GO online slot allows the players to bet as little as $0.01 on a single active line, or press the bet to $18.75 per spin (by activating all 15 lines, increasing the denomination, and wagering up to 5 coins per line).

The volatility is between medium and high and the hit frequency of bonus features is somewhat low. 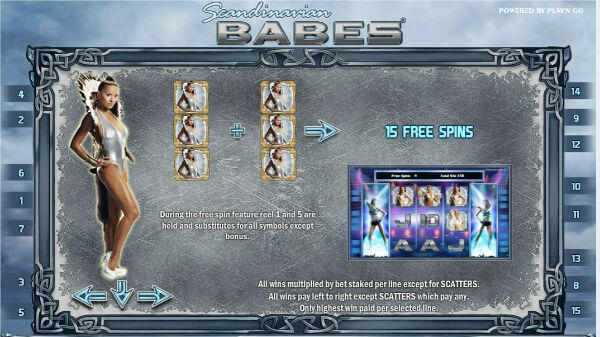 The game benefits from Free Spins that may be particularly difficult to trigger at times, but the base game wins will still land frequently.

Free Spins are activated by the stacked Wild Brunette on the first and last reel. This will set in motion 15 bonus rounds, during which reels 1 and 5 will hold still while the rest of the columns are spinning.

A classic picking game that can award up to 150x multiplier. All you need to do is select one of the 3 dancers and a cash prize will be revealed (along with the other two prizes that you did not get).

This feature activates after every win, enabling you to double the payout every time you guess the colour of the card facing down. The payouts are higher if you manage to guess the suit as well. The feature is, of course, optional, and you can simply collect the money and continue the session without gambling.

Playboy by Microgaming is a 243 ways to win slot launched in 2013, generating up to 1,215,000 coins per spin. Despite the legacy of the brand, Playboy slot designers have shown an impressive amount of restraint, opting for a sexy rather than a raunchy interpretation of the theme (you can check our comparison of all Playboy slots).

The Bunny is the Wild symbol that doubles the payout every time it completes the winning combination. It can also replace all other icons except for the Stack of Playboys Scatter, which triggers the Playboy Club Free Spins.

As mentioned, the bonus rounds in Playboy slot are unlocked when the combination of 3 to 5 Scatters is formed on the reels, initiating one of the following Free Spins modes:

Level of Erotica: Mild to medium

Those with an appreciation for curves will enjoy Endorphina’s 5-payline slot immensely. Not only does the 2016 release celebrate the female form in all its glory, but it also produces up to 250,000 coins per spin.

The gameplay is quite simple, and Endorphina seems to rely on derrières and upbeat music to keep the players engaged.

The dynamic Battle Feature with bonus points awarded every time your dancer defeats the opponent in the dance-off (or twerk-off, in this case).

3 Scatter symbols will activate the Free Spins with the Battle Feature, during which one of the girls will be singled out to compete with other dancers. The battle will last up to 6 rounds and whoever scores more points will win. The feature is re-triggered if more Scatters land on the reels, adding 3 more dance rounds.

Every payout can be increased up to 10 times if the player’s card beats the virtual dealer. You will have four cards to choose from – Joker trumps all hands, and only the player can draw this card. Same value cards will be resolved as a push.

This slot combines two ultimate fantasies of an average male – football and provocatively dressed ladies. Benchwarmers Football Girls is a 30-payline game that’s suitable for both high limit slots players and recreational players. The lines can be adjusted, allowing you to bet $0.20 – $3,000 per spin.

The Benchwarmer Girls are the high paying symbols, with the eager supporter of the Italian football club as the highest-value icon. The next in line are four equally enthusiastic females, who were so eager to see the game that they rushed to the court wearing nothing but their underwear…

The slot offers Free Games with the Bench Warmer feature and Football Bonus where you can reveal cash prizes.

The Free Rounds are activated by 3+ Bench Warmer Scatters and before the feature is initiated, you can select any of the Benchwarmer Girls to cover the first reel. The symbol will remain locked on the reel for the next 4 spins – the rest of the girls will not land on the grid during the feature.

Bench Warmer bonus can be re-activated an indefinite number of times.

If a Bonus symbol lands on the reels 1 and 5, the Football Bonus picking game will be initiated, prompting you to pick 3 out of 5 balls and reveal cash prizes. Unfortunately, this feature cannot be re-triggered.

Level of Erotica: Mild to medium

A steaming hot release, inspired by the infamous Red Lights district in Amsterdam, where love (or lust) is for sale day and night. Instead of using real-life footage, Tom Horn Gaming decided on a more tactful approach (for the lack of a better expression). This will not diminish the eroticism of the slot, and even the animated girls are quite capable of raising the players’ heartbeat levels.

The slot features two Wild Symbols which can replace all other icons and activate the Free Spins.

The Free Spins start when one of the two Wild Girls lands on reels 1 or 5, locking into the landing position and expanding across the entire reel. Additional spins can be triggered if more Wilds appear on the grid. The payouts generated in the Free Spins will be doubled if a single Expanding Wild is locked on the reel or quadrupled if two Wilds share the grid.

All payouts can be boosted in the Strip Gambling Feature, which is quite cheeky, inviting you to strip one of the girls. To double the winning amount, you will have to guess which of the two symbols hides behind the silhouette in the middle of the game screen. Every time your guess is correct, the amount will be doubled.

Mystery Bonus is awarded randomly – a combo of 3 X symbols can form a combination in the middle of the screen and award a cash prize on any spin.

The Sunset version introduces the Cash Wheel Bonus, Respin Bonus, 2 Free Games features and the Quick Hit Progressive Jackpots. For a chance to win a jackpot, you will need to press the bets.

Activated by a cluster of Scatters which either pay up to 1,500x player’s bet or trigger the Quick Hit jackpot on a maximum bet.

The Wheel Bonus icon can only land on reels 2- 4, granting a spin on the wheel. The spin can award a cash prize with a multiplier or one of the two features:

It is played on 9 paylines and every time a winning combination is formed, the featuring ladies become (believe it or not) even more loose, not leaving anything to the imagination.

The main attraction of the slot, apart from the hot ladies, is the Free Games feature awarding trebled prizes.

Free Games symbol starts 15 re-triggerable free spins, but only if it lands on the first and the last reel. During the bonus, all payouts will be multiplied by 3.

One other way to increase your winning before collecting it would be to use the Gamble option. To double the amount, you must guess the colour of the card facing down. Or, to be more specific, you will need to opt for either Black or Red and then stop the flashing card.