Soul Queen Quad Shot is an Ainsworth video slot with a vague theme. We can say that it’s a bit spiritual with Soul Queen being the protagonist of the story behind the game. The reels are also home to symbols depicted as diamonds, roses, lockets, golden swans and perfume bottles. Generic playing card symbol pay prizes of lower values.

Just like the theme of the game, its backdrop is quite vague while graphics look dated. The reels are set within the golden frame above which you can see the four fixed jackpots.  The slot uses 5 reels and 30 adjustable paylines. The highlight of the game is the Soul feature awarding free spins with multipliers going up to 10x.

Let’s take a closer look at the Ainsworth title and the reasons why you should and should not play it.

The Soul Queen Quad Shot slot features a total of 4 special symbols including Wild portrayed as the queen herself that will help you complete as many winning combinations as possible.

If you manage to land a 5 of a kind winning combo with the Quad Shot Bonus symbol in the meter on the right-hand side of the reels, you can win one of the four jackpot prizes – Mini, Minor, Maxi or Major. The jackpot will be determined by the symbol included in a winning combination. The Major jackpot is worth 333.33x your bet.

Land 3 or more Soul Queen Scatters anywhere in view and you will win 8 free games and up to 100x your stake on top. Before free games start, the reels 1, 2, 4 and 5 will spin with special Soul symbols landing on them and staying in their positions. During the feature, these soul symbols will transform into one of the regular symbols thus helping you complete more winning combos. 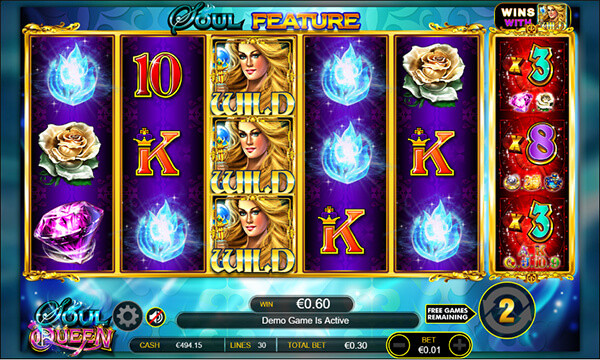 Combinations completed with Soul Queen Wild will be subject to a multiplier according to the paytable. It can be between 2x and 8x, which depends on the winning symbols and the number of a free spin. If you retrigger the feature, you will win extra 5 free spins during which all winnings completed with Wilds will be increased by 10x.

We didn’t like Soul Queen Quad Shot at first, but after playing over 100 spins, we have changed our mind a bit. Despite its outdated appearance, generic sound effects and low RTP, we scooped some hefty payouts. They are hidden within the Super feature triggered after regular free spins where all combinations with Wilds pay prizes multiplied by 10. At a $15 stake, we have won a total of almost $2,400 during free spins and Super free spins.