While 5-reel slots are the standard nowadays, that wasn’t always the case. Initially, physical machines were usually played in a 3×3 block, with just one payline. Competition eventually increased the number of paylines to three, then five, before increasing reel sizes outright! But despite that, there are still players who swear by the old, smaller playing fields.

There are certainly advantages to them! With fewer reels, paylines are more condensed, the slot is easier to understand and the play is more straightforward. This has led to quite a few casinos making the distinction between modern video slots, and more old-timey classic slots. Today, we’ll take a look at three of our favorite 3-reel 3 line slots. So get comfy, and get your wallet ready. Because you’ll want to try all three of these slots!

Frequent pays are something everyone likes. Sure, a long grind leading up to a super satisfying win can be a fantastic experience. But that doesn’t work out that well if you have to take a break before scoring the prize. In contrast, Triple Profits slot is what the gamblers of old would describe as a loose slot. Pays come in quite frequently, and that alone would probably earn it a spot on the list. But Playtech’s game goes one step further, and shows three payline releases can still be quite fun! 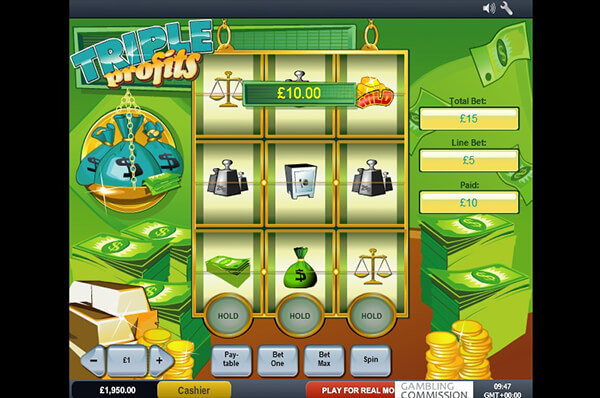 Triple Profits has a two-part spin. The first spin will only reveal symbols on the bottom reel. From here, you can choose to hold certain reels. The Hold function is totally free, so make liberal use of it! We always used it if a valuable icon appeared, or if we had two symbols lined up and ready to pay! This slot also has a pick-and-click bonus, triggered by collecting full rows of stacked money icons. The more you collect, the more picks you receive, and each pick awards a cash prize.

Of course, if we’re talking pure popularity, then Fruit Fiesta is the clear winner. Microgaming’s slot hasn’t impressed us as thoroughly as Triple Profits has. But it has one thing that Playtech’s game doesn’t; a progressive jackpot! You’re only eligible for it if you play with all three coins enabled.

Given the profit-driven nature of most classic slot players, that this release is the most popular of the bunch isn’t surprising. But while the progressive jackpot plays a big part, it’s not the sole reason for success. 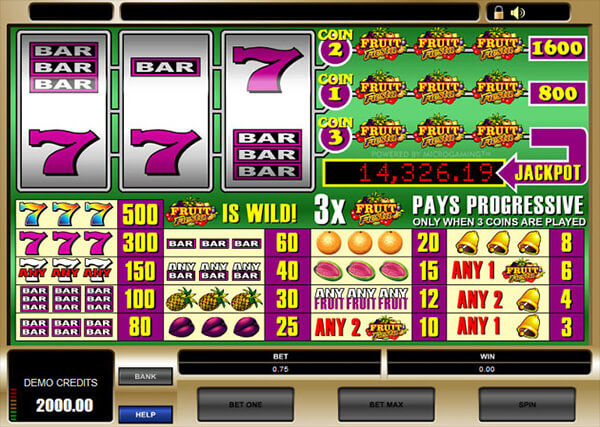 One look at the paytable, and you can see Microgaming has structured Fruit Fiesta to help you land wins. Bell and Wild icons can pay even with just one or two symbols present on the playing field. You can also get a three-of-a-kind win with any three fruits, bars or lucky sevens. Of course, ‘pure’ combinations will earn you more, but being able to mix and match is important! Doubly so for games with such a small board.

And while Fruit Fiesta benefits heavily from its progressive jackpot, it doesn’t have any other special features. A flaw Rival Gaming clearly noticed and decided to improve upon in their game, Jackpot 5x Wins!

The main attraction is still the progressive jackpot, which slowly increases with every spin players make. But this time around, you can also look forward to one additional special feature: Wilds with multipliers! Not the most original idea, but one that can very quickly award some huge prizes.

If they substitute for any symbol on the playing field, that winning combination will have its total prize increased by 5x! So, a three-of-a-kind red lucky seven, which usually earns 270 coins when played with three coins active, will instead yield 1350 coins! Of course, nothing beats a three-of-a-kind Wild win, which will either result is a massive cash prize or by triggering the progressive jackpot! Of course, to win the progressive jackpot, you have to play with all three coins active.