Slots with 9 paylines aren’t new to the industry but tend to be much rarer compared to a more standard number of paylines like 10, 20 or 25. That doesn’t mean you can’t make a good game out of them, on the contrary! We’d argue quite a few fan favourites had only 9 paylines. That said, it’s much easier to make 1, 3  or 5 line slots with 3 reels and it takes a talented developer to make such a small number of paylines work with a 5-reel board.

And sure, you could go through the trouble of tracking such releases and software providers yourself. But that would take a lot of time, and do you really want to spend your limited gambling hours like that? So we’ve taken the initiative, and went out of our way to find the best three 9 lines slots that we know of! Each of them offers something different, so we suggest checking all of them out! So, without further ado, here are our top three picks.

Don’t let the name fool you; there are no tea or teacups to be found in this game! Instead, it’s all about black gold, and Texas Ted’s ruthless exploitation of it! Those who get lucky egnough to win big will immediately understand why Texas Tea slot ended up on our favourites list. It has an unbelievably fantastic jackpot, sitting at 10,000 coins! This lucrative prize is quite rare but comes with a 97.35% RTP, which is above the current average. This RTP is only available if all nine paylines are active! 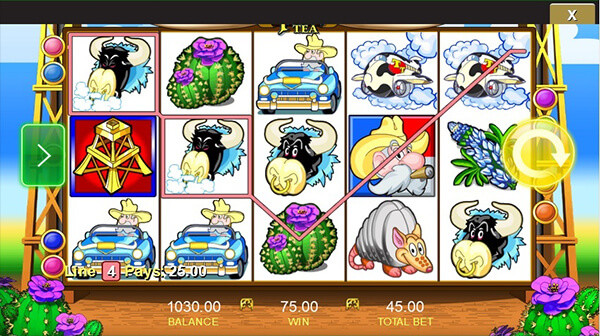 While you’re waiting for that perfect five-of-a-kind Texas symbol to appear, you’ll be happy to find not one, but two Scatters! Texas Ted is one, and a golden oil derrick is another. Texas Ted will grant a cash prize between 3x to 100x, depending on the number of Scatters that triggered the bonus, and some random chance. In the same vein, the bonus icon can grant between 5 and 495 per oil derrick, making it a swift way to accumulate some serious cash!

Of course, we’d be remiss if we didn’t mention the most popular 9-payline slot to ever exist! Book of Ra is a game we’re confident most gamblers have heard about, even if it’s just in passing. There’s a good reason for this: its special feature has inspired numerous clones by many other developers. It was so good, in fact, that even Novomatic themselves would go back to re-make this release several times! If you decide to play just one of these slots, then it should definitely be Book of Ra. 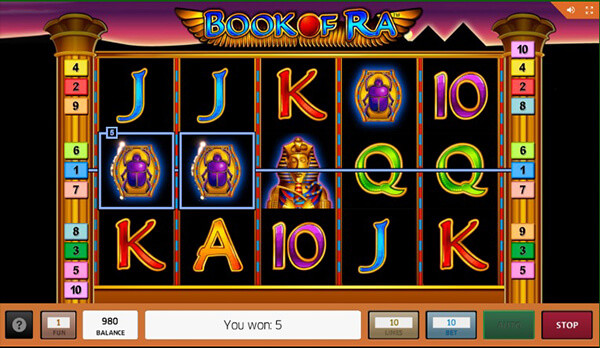 The reason why can be found, as we mentioned, in its special feature! At first glance, it seems fairly innocuous. Find three Scatters to win ten free spins. But on top of the extra turns, the game will pick one of the symbols from the playing field to become an expanding icon. This expanding symbol also adopts the Scatter pays system: being able to earn prizes from any position, including non-adjacent ones. So long as you have enough of the icon, you’ll be able to keep scoring prizes until free spins end.

But if there was ever a release that could rival Book of Ra’s popularity among 9 lines slots, it would probably be Dead or Alive! But unlike its competitor, NetEnt’s game targets a more specific population: high rollers! Due to its high volatility, this release will take a lot of spins to achieve any kind of substantial win. That sort of high risk, high reward gameplay is great for players who can afford it. But for more casual gamblers, Book of Ra will still win out.

Dead or Alive also comes with a sticky Wilds bonus and a free spins round! These bonuses are instrumental in achieving the jackpot, so hit them as often as possible. This slot also takes the prize of best looking by a mile! We like Book of Ra and Texas Tea, but this game is infinitely better when it comes to its visuals.