Dragon Spin is an Asian-themed slot released in 2015 by Bally Technologies, an American gaming cabinets and software manufacturer. They are known for their branded games – Titanic, Pawn Stars, Michael Jackson King of Pop, Money Talks, etc. The 30-payline video slot is not the developer’s only “Oriental piece”, but it is among the most popular editions thanks to Mystery Stacked Reels and multiple bonus games.

The game is played on a 5×3 reel grid which can be adjusted to the player’s device. To launch the game on your smartphone, you will have to switch to the landscape view, which will automatically adapt Dragon Spin to your home screen resolution.

Paylines are fixed and the stakes are selected manually, from the sliding menu to the right. The maximum bet is capped at $120 and the players can hit up to 24,000 coins per spin. An average return to the player percentage is estimated at 95.96% – not what one might call impressive, but somewhat compensated by Dragon Spin’s low volatility.

Why to Play Dragon Spin Slot 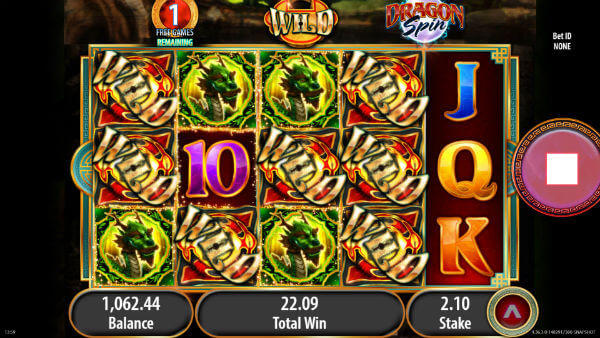 Dragon Spin has plenty of those, starting with the Mystery Stacked Reels, where each of the columns contains a Stacked Mystery position which will be filled with a randomly selected symbol at the beginning of the spin.

Bonus symbols cannot appear in Stacked Mystery positions. Instead, they trigger the Dragon Spin Bonus feature. When three of these icons land on reels 2, 3, and 4, Dragon Spin Wheel will determine which bonus will be unlocked: Raining Wilds, Persisting Wilds and Reel Blast Free Games.

None of the bonuses is re-triggerable and the Bonus icons will not be available during any of the above-mentioned games.

A well-executed slot that somehow manages to remain engaging despite the over-exploited Asian theme – probably thanks to the frequent payouts and the element of surprise introduced by the Dragon Spins Wheel.

The downside is that none of these free games can be reactivated while the feature is in progress, but with up to 10 Wilds in the Raining Wilds and between 2 and 7 Wilds in Persisting Wilds Free Games, that can be easily forgiven.