How to win at Slots, Slot Machine Reviews

Relax Gaming brings us a title that forgoes conventions in favour of something a little bit different. With a tree-filled garden as a backdrop, you’ll be juggling plenty of fruit in this video slot, with the possibility of taking home a very sweet and healthy jackpot. The RTP here is crazy – 99.91% – highest payout slot online.

The visuals are cute looking, if a bit shrunk down, thanks to the fact you have to spread them all across not one, but four different 3×3 reels in which you place a block of 3×1 symbols that are generated randomly. Each time one of those four playing fields produces a win, it will award a certain number of points, which you can see in the upper right corner. Collect enough points and you are rewarded with a cash prize. Collect the right symbol and you even get access to a small, but cool bonus feature.

Moody Fruits is a medium variance title which should suite most players.

Why to play Moody Fruits 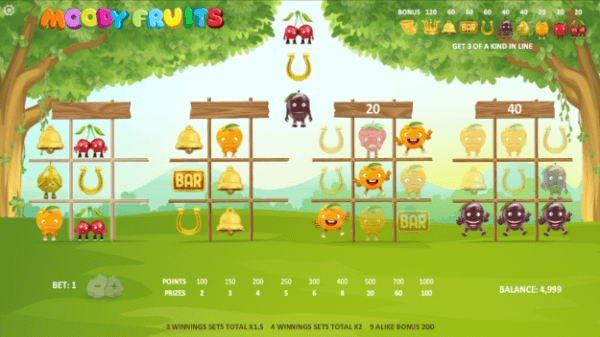 The slot has only one special feature to talk about, but it has awesome winning potential with a dash of luck.

If you collect three bonus symbols on one of the four playing fields, you get access to a special feature in which you fire giant cannon onto a massive, singular reel. Like here, connecting three symbols is still paramount, but apart from the fifteen free turns you get, you also have a chance to activate additional spins while the bonus lasts.

It was certainly different enough to catch our attention and draw us to play a fair bit of it. Moody Fruits has the possibility of thrilling your socks off if the stars align, but if you’re hoping for something more traditional, you’ll have to look elsewhere.