Red Baron  is a man of history and heroism, and his legacy as a World War I fighter pilot reaches the public again through the Aristocrat online slot with a similar name. Red Baron was actually named Manfred von Richthofen and is widely known for his 80 combat victories during World War I. To remember this great man, Aristocrat has created a 5 reel video slot with 243 ways to win, free spins, and a gamble feature.

Red Baron is filled with symbols to match the World War I theme based on the fighter pilot. The background is red, while the symbols on the reels include a radio, dog, Zeppelin, Red Baron’s plane, a woman, and Manfred. There are also lower paying symbols: 9, 10, J, Q, and K. 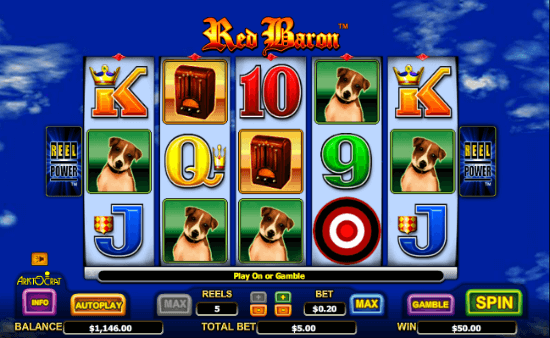 The bonus feature is free spins, but there is a second additional bit of fun for players that is a guessing game. During the guessing game, players have to determine how many planes will appear on the reels. The Pour le Merite medal is a wild icon. It will replace all game symbols, including the scatter. It is easy to spot as it has a red, white, and black target and appears on reels 2, 3, and 4 only. Players need the target scatter symbol to unlock 15 free spins. The guessing game has missions starting at 1 and up to 5. If the guess of how many planes is correct, the player earns a multiplier, which can be 10, 15, 25, 60, or 140 times the wager.

Plenty of excitement fills the screen with Red Baron slot machine from the theme to the bonus features. Starting off with 243 ways to win and adding in multipliers, free spins and a plane guessing game, makes Red Baron slot stand out from the rest. We can’t say that it’s the best Aristocrat slot out there (hard to compete with such popular names as Queen of the Nile or the Buffalo slot machine), but it’s definitely worth your time.