Carnival Queen slots loves its parties and is not shy about inviting others along! This new slot machine by Thunderkick will have you jumping to the beat alongside other party-goers, each with a different mask on. Playing card symbols such as 9, 10, J, Q, K and A can also be found on the playing field. They do not really fit in, but are all equally adept at triggering the Avalanche feature!

The reels themselves are hardly interesting. Instead, the slot’s background image is what you should keep your eyes on. The crowd dancing along to the music, getting more excited when wins pile in, and fireworks start exploding in the night sky.

The game is played on a 6-reel, 4-row grid with 4,096 ways to win, paying only from left to right. Special features include Avalanche, increasing multipliers, free spins and icon removal.

Why to Play Carnival Queen Slot

There are multiple bonuses available to players, with each of them tying into the other. As such, we will start with the most important one:

These are essentially cascading reels. When a winning combination is formed, the symbols are highlighted and blown up, making room for new ones to fall in their place from the top of the reels. This allows gamblers to chain several wins together for the price of a single spin. So long as the wins keep coming, new icons keep appearing, and the cycle continues. 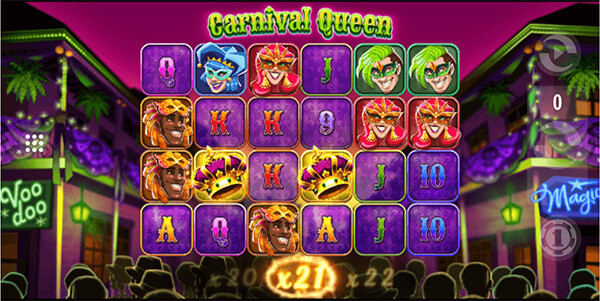 Collect three, four, five or six Scatters to win twelve, sixteen, twenty or twenty-four free spins, respectively. It is possible to win additional extra turns by collecting Scatters during the free spins. While the special feature is active, the multiplier will not reset, even after the Avalanche wins stops coming in.

If there are no winning combinations, a Wild will remove all symbols vertically and horizontally. This only occurs during free spins.

If you want to warm up for the upcoming carnival in Brazil, you could not have picked a better slot! Thunderkick clearly put in a lot of effort into it, and we love it as a result. Having said that, the graphics could be better, and the free spins are very difficult to trigger.A good effort, but needs a bit more polishing.