The famed and mighty Aztec civilization was massive during its glory days. To control such a vast swath of land required a lot of effort and might – and for all of its glory, they were no match for the Europeans whose superior technology forced the natives to yield. While the culture of the Aztec is long gone, their history still fascinates many and almost every software provider has some Aztec themed slot. Aztec’s Treasure and Aztecs Millions by RTG,  Sun and Moon by Aristocrat and many others. Jaguar Temple slot is  the Thunderkick’s take on the theme.

We quite like the graphics – the rolling mist in the background, as well as the cool symbols on the top of the playing field. The game is played on a 5×3 playing field and at 20 paylines, with the possibility of massive, 3×3 Mega Symbols appearing on the middle reel, as well as a familiar, yet ever welcome free spins bonus activated by collecting three or more Scatters. And have no fear, because it is possible to retrigger the feature.

The Thunderkick’s release is of medium variance, meaning players will have a nice mix of semi-frequent bonuses that keep things interesting, but the wins in total will be less exciting than ones from high variance games. The game has a 96.1% RTP, average for video slots and a bit below what some of the top Thunderkick slot machines have to offer.

Why to play Jaguar Temple 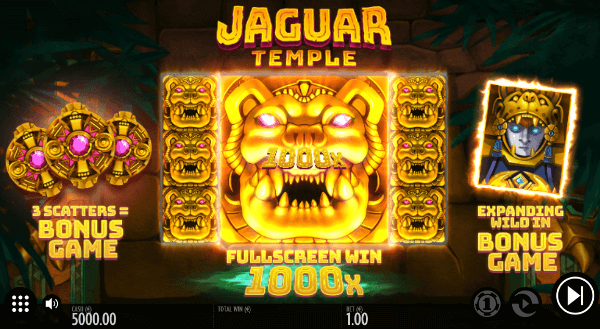 You have several bonuses that work in your favour in Jaguar Temple.

At random, a large 3×3 Jaguar symbol can appear on the middle three reels, taking them up in entirety, and increasing your odds of getting a big win with the highest paying symbol in the game.

We didn’t think we’d like it as much as we did at first glance, but it crept up on us slowly, but surely. Jaguar Temple was a lot of fun to play, and we can’t wait to get back in and give it a few more spins. We can very warmly recommend it to anyone who finds it interesting.