Zoom slot, fairly new game released in July 2016, is Thunderkick’s take on the classic fruit machine slot. And as usual, Thunderkick went pretty far from the original, so even those of you who’d normally keep clear of the classic slots, might want to give a try and actually end up enjoying.

Playing fixed 64 paylines, along with the expected fruit symbols you’ll find a unique use of the reel area with an expanding Scatter symbol delivering re-spins. If you wish to play this game for real money, then we recommend Guts casino. Also, here you can find update list of loosest Thunderkick slots, such as 1429 Uncharted Seas with 98.6% RTP.

Clicking on the casino chip opens a window with $0.10 to $100 bet amounts to choose from. Having done that, as paylines are fixed at 64, you’re ready to start spinning.

Base game symbols are the usual Stars, Sevens, Bells, Grapes and few other fruits. What is not usual is the set-up of reel area, with real set divided into 6 Zoom areas, each of 2*2 symbols in size. Zoom symbol, depicted as „Z“ is your Scatter, maximum of 1 to appear per Zoom area per spin.

Wild card, along with the Star icon, represents your highest paying symbol and can substitute for any other except Zoom.

Landing Zoom anywhere on the reels, makes it expand into a Massive symbol to cover the entire Zoom area, basically getting one icon to take place of the initial 4 and therefore increasing your chances of hitting a winning combination on the re-spin. NetEnt’s Spinata Grande slot has something similar (and it won 2015 Slot of the Year Award). 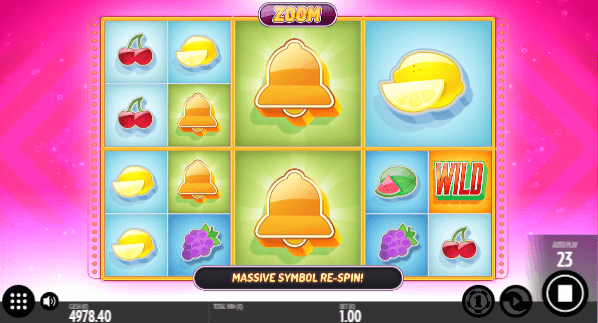 Getting Zoom symbols in 4 Zoom areas, forming a square, a Super-Massive symbol will emerge, spread over three quarters of the reel area and trigger a re-spin.

Zoom is basically a simple game with one simple feature, but at the same time a successful experiment in modernising a classic slot while keeping the appeal of the traditional fruit machines.

With a relatively high return to player rate of 96.2% and, as the developer claims himself, a 1 in 6 chance of getting the Zoom feature on any spin (which we can testify is about right), there is a fairly good chance you’ll walk away with a decent, if not life-changing win.