Goldfish is a classic slot machine developed by Williams Interactive. Despite the fact that gamers can now also enjoy Gold Fish 2, Gold Fish 3 and Goldfish Slot Deluxe, the original version remains one of the most popular slots, online and in Vegas casinos.

We have to admit that the land-based version houses better visuals, but six rewarding bonus features plus higher payouts make the Goldfish slot online a pretty wise choice. Unfortunately, if you are from United States, you cannot play WMS slots for real money.

Goldfish houses a pretty standard gameplay, where at least three identical icons are required to appear on a payline starting from the left to award a payout, but we don’t like the fact that players are forced to pay additional 10 coins per spin for having access to the special features. 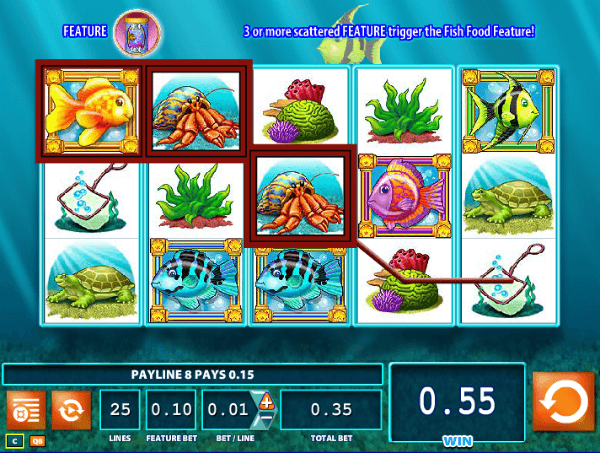 While the game is played at fixed 25 paylines, you will be staking 35 credits per spin, but at least you get to select coin value from no fewer than 30 coin denominations, ranging from $0.01 to $3. Autoplay and Max Bet options are supported, whereas the players can also choose to view Classic Panel or Quickbet Panel below the reels.

Goldfish slot comes with a 96.0% return to player. It’s far behind WMS Nemo’s Voyage and Monopoly Big Event slots, but still great, considering that the land-based version will give you something between 88%-92%.

Fish Food Bonus is unlocked when three Fish Food Scatters are found anywhere on the game screen. You then need to match food of same colour and will be awarded a payout based on your success.

On the other hand, the Random Fish feature is both more interesting and likely to award higher payouts, with the colour of a fish that jumps out of a fishbowl set to determine which one of the five mini-games you will play.

You can win instant credit payouts, cash prizes, free spins, multipliers and more, although you will need a smile from Lady Luck to ensure the feature is activated on your watch.

WMS classic slots machine may not be too visually appealing, but it awards frequent wins and its random features can make a serious difference to your account balance, providing they occur on relatively frequent basis. We also like the wide array of affordable coin values, while the 96.0% RTP is enough to suggest you stand a decent chance of turning a profit in the final count.