Given how many successful slot machines WMS has made and how long they’ve been at it, it’s only natural for them to put John Wayne in one of their titles. Though a somewhat older figure recognizable to US gamblers than others, his reign over the silver screen and western movies rivalled Clint Eastwood.

The visuals of John Wayne slot machine aren’t spectacular, but they still manage to look good for their time. The title itself is played on a 5×3 playing field, spiced up by the presence of several special features. One of them gives you a chance to further populate the reels with the same symbol that triggered the win – the other one is a humble but powerful free spins bonus, made even more so by the inclusion of the first feature into the second.

The expected return (RTP) here is 95%, which is ok, although it’s not one of the loosest online slots. Also notice that there is another slots with similar name which can be found in Playtech casinos.

Why to play John Wayne

John Wayne offers two special features, one that’s stand-alone and the other leans on the first slightly to make itself more fun.

When three or more symbols form a winning combination in the slot, these icons will freeze in place, while the reels around them re-spin. Any additional symbols that belong to the winning combination will be frozen, and another re-spin will be granted. This keeps going until the reels are completely covered in that one symbol, or the icon stops coming, at which points the game just grants you the cash reward for your luck. 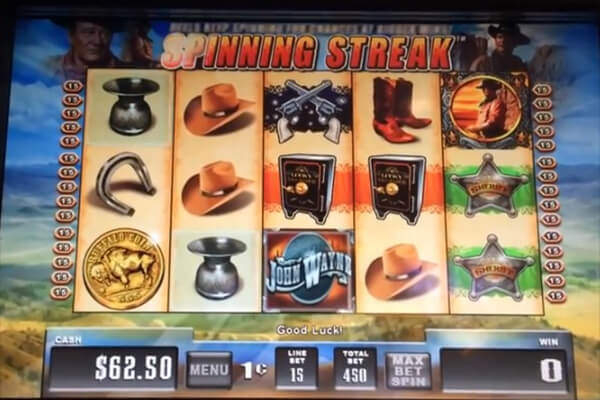 Collecting enough Scatters rewards the gambler with eight free spins, with a chance to win more by retriggering the feature. The Spinning Streak is in effect during free spins, making it even more lucrative.

Slightly dated visuals won’t stop you from diving head-first into the fun mechanics of this title. Mediocre RTP, but the gameplay is really solid, so this is a tentative plus as far as we’re concerned.