WMS took a sure thing – a super-popular board game called Monopoly, and created a whole range of Monopoly themed video slots with unique special features. This 5-reel and 20-payline affair plays with stacked high-value icons and a Wild substitute, offering a chance to spin the Big Money Reel and subsequently trigger one of two bonus rounds or win up to 10,000 credits.

We would say that Monopoly Big Money Reel slot machine is a bit less popular than some of its direct competitors, such as Monopoly Big Event or Monopoly on the Money, but it’s still a great game to play. Although the RTP here is a bit lower than the aforementioned slots. 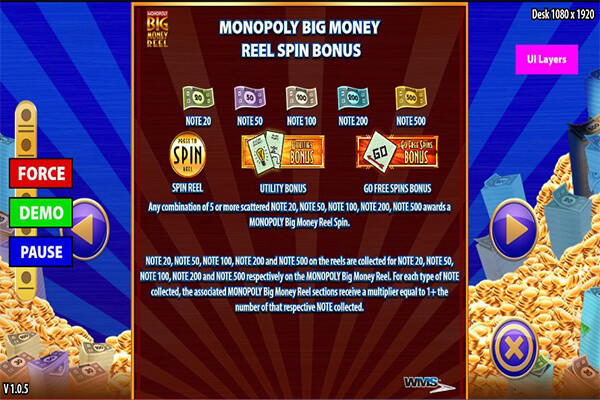 As long as you’re wagering real money, any spin could result in extra Scattered notes added to the reels. Should that happen, all of them will either change to become one and the same or transform into notes of other denominations. Full screen of identical notes pays between 5x and 50x your total stake.

Land 5+ Scatters and you’ll be rewarded with the Monopoly Big Money Reel Spin. Notes are collected and the associated reel section receives a multiplier equal to the number of stashed notes +1. Click on the Spin Reel button and, depending on where the pointer ends, you may get to collect an instant reward, launch Go Free Spins, or activate the Utility Bonus.

The player is initially awarded 8 spins on the house. Before each of the spin starts, they’ll need to pick a GO symbol to reveal one of the five Scatters and see all notes transformed into the revealed one for that spin. Every note visible on screen delivers a cash prize equal to its value multiplied by total bet. Landing 3 Scattered Go Extra Spin symbols awards additional free games, 4 will additionally pay 5x your total stake, and 5 will add 50x the amount wagered to your balance. If you win extra spins, the Big Money Reel spins to reveal their number before you’re treated to another batch of 5 to30 free rounds.

At the start of the Utility Bonus round, Mr. Monopoly will offer you to pick a hand and reveal SPIN, COLLECT, or COLLECTx2. The first spins an alternate Big Money Reel to award a cash value of 20 to 500 credits or a multiplier of x2 or x3. Each spin will be followed by another pick as long as the player doesn’t stumble upon one of the COLLECT symbols or until they make 10 picks. If Mr. Monopoly reveals COLLECTx2, bankroll gets doubled before the base game resumes.

Fans of the iconic board game will doubtlessly enjoy this fun hybrid, but even if not one of them, you’re bound to appreciate multiple bonus rounds with high win potential. Mini-games are not all that easy to trigger so manage your bankroll carefully until they do.