Neptune’s Quest is a WMS casino slot set in the vast depths of the ocean. Far from human eyes, Neptune’s domain houses an underwater paradise to those who are worthy to find this secret place. But to get there, you will need to clear the ocean depths of starfish and shells, swim past colourful fish, find tridents and dodge water bulls and mermaids. Only then will you meet Neptune, and undertake the final challenge – surviving his giant octopus monster!

The reels take up most of the screen’s right side, while Neptune’s underwater home is visible on the left. WMS are know for special reels sets, such as their Colossal Reels slots and various other settings such as 192 lines of Zeus 3 and so on. Neptune’s Quest falls under this category and played on a unique setup: players have two 2×2 reels attached to a larger 3×6 grid. There are a total of 100 fixed paylines on the playing field: 50 on top and 50 at the bottom.

Special features include free spins with extended Wilds and the ability to win additional turns while free spins are active.

If you dare take the plunge into the unknown, now is the time to do it. Neptune awaits the worthy to undertake his quest – will you live up to the challenge?

Why to Play Neptune’s Quest Slot 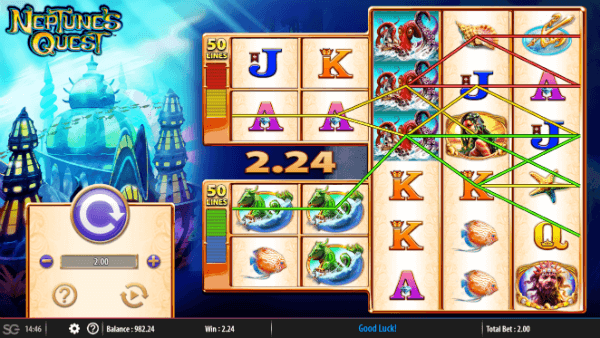 There is only one special feature available to gamblers in Neptune’s Quest – free spins with extended Wilds.

The bonus can be triggered in two different ways:

Matching icons that triggered the bonus become sticky and lock in place during free spins.

While the special feature is active, the Extended Wild appears and locks in place on the eleventh reel. It occupies multiple positions on the ninth, tenth and eleventh reel, increasing the chances of landing a winning combination.

Finally, collecting three Scatters on the ninth, tenth and eleventh reel during free spins will net you five extra turns.

WMS always performed best in land-based casinos, but that does not mean there is no demand for their slots online. Neptune’s Quest shows that, despite many years passing, no other developer tried the ideas WMS perfected. The game is not perfect. It needs more bonuses and a serious visual upgrade. But if you can look past both, there is a really fun title waiting for you to try it.