It is no surprise after the popularity of the original, that Barcrest would make a sequel to the old Rainbow Riches slot. This time around, the slot plays similarly to Spartacus  or Giants Gold slots and brought online by WMS (of course both companies belong to Scientific Games Corp) . Transferring Wilds and colossal reels will leave you glued to your phone’s screen, while big bet choices and free spins bonuses will further entice you to keep spinning. 5 reels and 100 paylines pair up across two different playing fields. Is Rainbow Riches Reels of Gold slot a worthy sequel to its predecessor? Let’s find out.

One more thing before we start – the RTP of this slot changes drastically according to your bet level, so make sure to read the return details before you play for real money.

The graphics have obviously taken a step up with this being a sequel, but like the above mentioned Spartacus, the slot feels maybe a little bit too large for its own good. While the quality of icons, reels and animations is obviously top notch, smaller phones will just make the game look silly, failing to properly represent the sense of grandeur that fills this title. That said, we are happy they lost the odd purple backdrop in favor of something a bit more traditional. 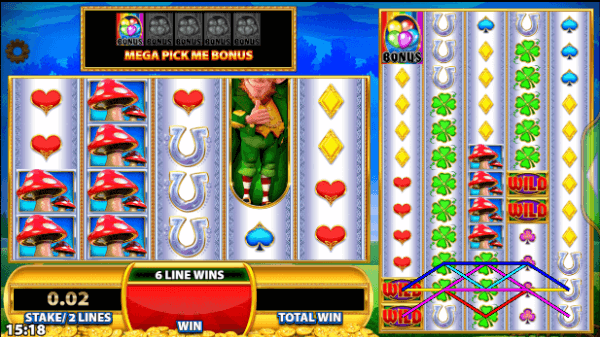 The RTP of Reels of Gold slot depends on what bet level you play. Below $2 and your RTP sits at 92%. Above $2 and it jumps up to 96%, and play with Big Bets, and it goes way up to 98%!, making it one of the best slots online. Naturally, this being a sequel to the original Rainbow Riches, the bet range is insanely high, going from $0.10 up to a whopping $500. On top of that, you have the Big Bet presets which allow you to sink a certain amount of money, which is paired with a few bonuses to entice you into hoping for bonuses to appear.

The slot has so many special features to keep track of it honestly might intimidate some players when you first open it up and try to keep track of everything. Wilds can substitute for all icons except balloon Scatters, and come paired with the ability to transfer from the smaller 5×4 reel onto the 5×12 one. If you have a full row of Wilds transferred on the first and second reel, it’s a near guaranteed full win with all 100 paylines involved.

Scatters come in shape of balloons, and offer you a free spins bonus if you activate three or more of them. They can only appear on the first, third and fifth reel of both the ordinary and colossal reels. You pick between three balloons to receive your free spins. If you played for more than $0.50 per spin, you can also choose to gamble those free spins to potentially get more – but if you lose, you lose it all.

Finally, the game offers you Fairy Bonuses. There are seven in total, and they appear randomly. Magically appearing Wilds, Wilds that move, a spell that will turn all your lower paying icons into a single magic symbol, multiplier bonuses, stacked Wilds appearing on the playing field, the fairy adding another balloon if you’re missing just one to complete a free spins special feature, and a reel win shuffle that can create a win from a losing combination.

Rainbow Riches Reels of Gold slot honestly feels massive to play. Just getting a grasp on how the paylines are supposed to go and keeping all the bonuses in mind is a daunting task in by itself, but much like its predecessor, it knows how to entice players into coming in and playing the slot. We have no doubt that some amazing wins can lurk just beneath the surface, so if you wanted the old Rainbow Riches with even more wins and bonuses, this game will scratch that itch exactly.