The story of Spartacus and his struggle against the Roman system that enslaved him has been immortalized in stories that are still told to this day in books and TV shows. And much like the man himself, you will feel overwhelmed by the presence of two playing fields, both with 5 reels, that demand your attention in their full authority.

With colossal reels, wilds, free spins with strong multipliers, and the potential for high wins, rare few can resist the charm of Spartacus slot. So buckle up, gladiator, and prepare to fight your way to your hefty wins.

If you are a fan of WMS popular Colossal Reels slot series , you should also check Rainbow Riches, Giant’s Gold and Lil Red Riches.

While the design itself is a bit bland, that isn’t the major point that holds back Spartacus. Instead, it is the fact that it was originally designed for desktops, and then brought down to mobile phones. And while it looks fine on some larger tablets, smaller devices are going to be a pain to play this on. The colossal reels are simply too large, and the whole system feels out of place, or a mockery of the original, failing to properly represent the grandness of the desktop release.

The gameplay is also somewhat unorthodox. The game’s design gives you two separate playing fields, one with a more normal size, and another that has a 5×12 format. They are interwoven in a complicated manner, giving this slot 100 paylines to work with, even though the wins you will have are rare and somewhat disappointing, at least for us. You can play this for $0.50 up to $250, giving it a wide betting range that should appease most players.

The lifetime RTP of Spartacus Gladiator of Rome slot (this is it’s official name) is 95.98%. It quite ok, but lower than some high paying WMS slots, such as Monopoly Big Event and Nemo’s Voyage.

In order to accommodate the massive playing field, the slot usually has symbols stacked on top of one another. This is great for completing wins usually, but it also offers an interesting Wild mechanic. Namely, if the first reel is stacked with Wilds, the first reel of the Colossal reels is also stacked. This increases your odds of winning, but does not guarantee it.

You also have Scatters, which are used to activate a very lucrative free spins bonus. Scatters only appear on the first, third and fifth reel in both the smaller and larger reels. 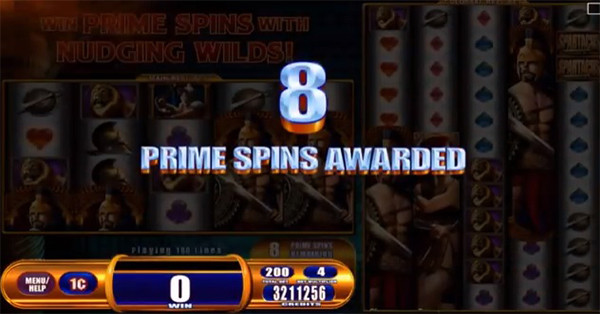 From there, you can win between 8 to 20 free spins, and a multiplier between 2x to 20x your wager. It depends on how many Scatters activated the special feature, and it should be noted that the highest bonus is very difficult to achieve, but is certainly quite rewarding if you are lucky enough to activate it.

There is definitely a lot of fun to be had here, if luck is on your side and your device isn’t too small. For us, personally, this game fails to capture the greatness of the original. There might be others who feel differently, but for us, this was a bit of a disappointment. Still, if you have been craving something from WMS on mobile devices, it’s a great release.