Whether a Greek mythology fan or not, you are guaranteed to delight in this highly ingenious slot machine, powered by WMS Gaming. Zeus slots are one of the most popular WMS slots series, so the launch of the new title is great news.

Zeus God of Thunder slot is packed with innovative and highly rewarding bonus features and special symbols, such as Wheel of Fortune feature, free spins, five-tier jackpot, and Wilds.

Unlike the asymmetric Zeus 3 slot, this game is played across 5 reels and 30 paylines and features a randomly triggered Jackpot of 100,000 coins.

Zeus God of Thunder slot is themed around the most popular Greek god – Zeus, who was the son of Rhea and Kronos. The game’s graphics and animations are really superb, with a dramatic air to them. The magical looking night landscape with clouds hovering above serve as the backdrop to the reels, while the sudden appearance of Zeus himself contribute to a grandiose atmosphere.

The reels are home to Zeus’ eagle, thunderbolts, reefs, goblets, lions, wreaths, lightning emblems, and Zeus himself. Wilds are represented by the Zeus’ temple, which can only land on the second, third, and fourth reel.

As you will notice, there are three wheels of fortune just above the grid. You can enjoy their benefits if you choose to use the Extra Bet option. If you decide not to make use of this feature, however, only one reel will stay activated throughout the gameplay. You are required to keep an eye on a special background that randomly makes an appearance behind the icons on the reel set.

If it lines up behind at least three icons in the same row, the Wheel feature will be triggered and you will be awarded one wheel spin. Obviously, the more consecutive symbols you obtain, the heftier the prizes will be offered on that wheel of fortune. In addition, each wheel can activate the free spins feature, the so-called Upgrade, that is a spin of the next wheel or a jackpot. 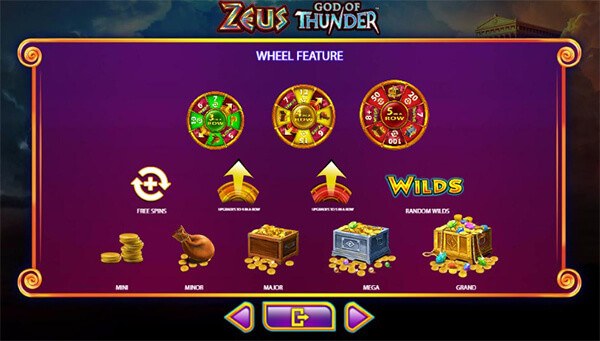 The Wild Spin Bonus feature awards a spin with a randomly decided number of Wilds which will be added to the reels. The number of Wild symbols you are granted, will be determined by the wheel that launched the feature. For instance, five random Wilds are awarded from the three-in-a-row wheel, whereas, from the five-in-a-row wheel, you will get up to 7 random Wild icons.

Free Spins feature is launched the same way as in the Wild Spin Bonus round, with the help of the Wheel feature. So, if you pitch three in a row, you will be provided five or seven free spins. Four in a row will get you 10 or 12 free games. And, if you’re lucky to land five in a row, you will win even 15, 20, or 50 free spins.

Zeus is envisioned in such an ingenious way that it will easily send chills down your spine. With its unparalleled visuals, a number of rewarding bonus features, special symbols and smooth animations that aptly complete the Greek mythology-inspired title, this is, no doubt, a game that will keep you coming back for more.

In terms of variance, Zeus God of Thunder slot is a medium to high affair with sizeable wins offered in both the main game and bonus rounds as well. The RTP stands on 96.05%, which is fairly reasonable.