If you’ve played Vikings Go Berzerk and Vikings Go Wild slots, then you’ll definitely love the third installment of this Yggdrasil Gaming slots series. Our fearless Scandinavian heroes embark on an epic adventure where they’ll have to fight the gods of the underworld! It’s up to you to help them win this battle, and they’ll reward you handsomely.

Vikings Go to Hell slot has 5 reels, 4 rows, and a total of 25 fixed paylines. The reels are set against a stone covered with runes, while the Rage meter of each of our heroes is located next to the grid.

This feature-rich title offers a treasure chest that gives you rage points, cash prizes and free spins, which can make the whole experience unforgettable.

Why to Play Vikings Go To Hell Slot

Guys at Yggdrasil have done a good job here. The game’s features definitely add more excitement, while at the same time boosting your chances to win big. 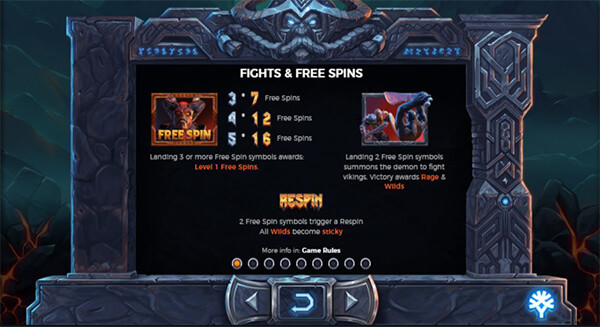 A minimum of three Scatters is needed to activate this feature, where you’ll fight against a demon after each spin. If you’re good enough, you’ll advance to the next level, where you’ll have to battle Lucifer himself. Fight like a true warrior, and you’ll be handsomely rewarded for your bravery.

After Vikings win a fight against a demon, their respective rage meters will be filled with points. Once the meter is full, the Berzerk Free Spins feature is triggered, with 7 spins awarded to the lucky player.

We highly recommend Vikings Go to Hell slot machine. It’s an action-packed, feature-rich adventure that definitely has the potential to keep you seated for hours. It looks fantastic, its gameplay is awesome, and the prizes it has in store can be amazing.